Information technology, with its ever growing demand for static and dynamic data storage with both high density and high speed, is one of the driving forces behind the advancement of nanotechnology. This is illustrated by the famous Moore’s law, which describes the temporal development of transistor densities in related integrated circuits and extrapolates to a 10 nm node fabrication by 2017. Similarly, the less popular Kryder’s law projects the areal storage density for magnetic disks at 40 terabytes per square inch by 2020, which translates into approximately 20 nm per byte. Magnetic recording is the technology of choice for large data storage applications as well as for the next generation of nonvolatile, random access memory technologies. Therefore, worldwide activity in this field (including the choice of magnetic materials as well as their resulting properties when fabricated as nanoscale units) is a natural consequence. Thus, it also seems natural that the Beilstein Nanotechnology Symposia series would focus on the topic “Magnetization dynamics on the nanometer scale” for the 2015 event.

Although the Symposium was dedicated to basic physics with a focus on fundamental problems related to magnetization dynamics, these applications were the driving force that triggered the idea to arrange the oral and poster contributions around two extended talks reviewing the state-of-the-art and envisioning possible future trends for magnetic data storage. The first, also serving as the opening talk, was given by Manfred Albrecht (University Augsburg) on Sunday evening. This talk concentrated on bit patterned media and suitable materials optimized for that purpose. In this context, Fe/Pt/Cu was mentioned as a promising candidate material where patterning could be performed by a combination of nanoimprinting and etching. The second talk, delivered by Stuart Parkin (MPI Halle) on Tuesday evening, reported on a recent improvement in racetrack memory that was previously introduced by his group. The new design, comprised of a pair of antiparallel-magnetized nanowires separated by a heavy-metal layer, leads to a much higher domain wall velocity due to current-induced spin-orbit torque in the heavy metal and compensated dipolar fields for the synthetic antiferromagnetic structure.

The main topic of the Symposium was immediately introduced in the Monday morning session by a description of how theory tackles the problem of ultrafast, light-induced magnetization/demagnetization. Emphasis was placed on the essential mechanisms involved with a distinction between local and nonlocal spin-flip processes. All the points addressed in the theoretical introduction were picked up again in the subsequent experimental contributions based on pump–probe experiments performed on multilayer systems. Such systems allow for the analysis of light-induced spin transfer torque (STT) and even the distinction between the transfer of “hot” electrons and the spin-Seebeck effect due to the high temperature gradients generated. Additional insights were reported, delivering element-specific information on fast and ultrafast magnetization dynamics in complex, multi-sublattice magnets and multilayer magnetic structures by employing a transverse magneto-optical Kerr geometry and using extreme ultraviolet pulses from high-harmonic generation. Similarly, time-resolved photoemission (employing femtosecond, higher-order harmonic, vacuum ultraviolet pulses) and parallel recording the 4f magnetic linear dichroism (MLD) and the exchange splitting of the 5d minority and majority spin valence bands in gadolinium revealed a surprising breakdown of the intra-atomic exchange upon femtosecond laser excitation. Spin-transfer torque played an important role quite generally and was addressed quite often, including the idea to exploit STT to compensate for magnetic damping, and thus, to possibly establish spin-torque oscillators. The most interesting point in this context was that from an experimental point-of-view, the confirmation of local or nonlocal spin flips as the cause of magnetization dynamics appears to be by no means clear cut. Rather, both mechanisms appear to contribute to ultrafast demagnetization. Yet another recent example employing nanolithography to fabricate nanopillars of Co/Cu layers with a megahertz lock-in X-ray spectromicroscopy technique demonstrated STT. The application of a nanosecond, electrical pulse produced a strong spin-polarized current flow between thin Co and Cu layers. This transferred an average transient magnetic moment of 1 × 10−5·μB per Cu atom, which was found to be parallel to the magnetization in Co.

The detailed observation of the magnetic moments induced on Cu atoms at the interface revealed the dominance of the spin-torque alignment over Joule-heat-induced disorder of the interfacial Cu moments during current flow. In addition, the STT experimental data on spin-orbit torque (SOT) were also presented during the Symposium. By combining X-ray magnetic circular dichroism (XMCD) and polar Kerr effect experiments applied to a several micrometer wide current line (consisting of a Pt/Co bilayer structure with in-plane magnetization), the strength of the SOT could be extracted with lateral resolution. An especially challenging situation of magnetization switching is related to antiferromagnetic materials due to the absence of a macroscopic moment. However, as reported during the Symposium, fully optical switching can be successfully performed in TbMnO3. In this multiferroic material, the antiferromagnetic state can be manipulated via the rigidly coupled ferroelectric state by using a unique relation between the direction of the spontaneous polarization state and the wavelength of the light pulse. It was revealed that this optical magneto-electric switching was a fully reversible process.

To further emphasize the nanoscale focus of the Symposium, the above contributions were framed by talks related to dramatically narrowing the number of addressed magnetic moments down to single spins. To accomplish this, spin-sensitive variants of scanning tunneling spectroscopy (STS) played a decisive role by providing the necessary spatial resolution on an atomic/molecular scale. Information on the temporal spin relaxation was again obtained by pump–probe experiments. In the case of STS, however, this was obtained by time-delayed voltage pulses: one above the threshold for exciting the spin system of the atom/molecule under study and a second subthreshold pulse to provide the spin state. Ramping the delay time then delivers the spin relaxation times. Additionally, by using the tunneling tip to locally arrange atoms, the influence of such arrangements on the spin relaxation rate of the probed atom can be tested. As stated at the Symposium, “access to the time-domain magnetic atoms on surfaces provides an avenue to explore quantum dynamics in correlated systems”. Spin sensitivity can, however, also be obtained with nonmagnetic tips. One example reported in Potsdam was related to paramagnetic atoms/molecules on a superconductor. In such a case, the magnetic information stems from spin-induced characteristic states within the superconducting gap, and the time scale can be extracted by time-delayed probing of their population/depopulation. In both of these approaches, relaxation times on the order of tens of nanoseconds were found. The talks on single spins were completed by addressing a system that experienced dramatic improvements in understanding the physics involved as well as a development towards sensor applications. The system is a nitrogen vacancy complex in otherwise as pure as possible diamond. The contributions reported on integrating the necessary nanodiamonds for use as diamond scanning probes, enabling magnetic field measurements on the nanoscale with nanotesla sensitivity. Furthermore, the application electron-spin resonance techniques allowed for the study of magnetization and dynamics over a wide range of frequencies with an optical readout.

The oral contributions were supplemented by twenty high-quality posters, which were presented during a well-attended special session on Monday evening and remained posted during the entire Symposium, allowing for additional spontaneous discussions. More details on the oral and poster contributions can be found below.

The Symposium was highlighted by lively discussions and a constructive atmosphere inside and outside the lecture hall. The fortuitous appearance of blue skies, the hotel terrace offering a fantastic view of Lake Griebnitz, the excellent food and service provided by the hotel, as well as an outing exhibiting the historic sites of Potsdam definitely contributed to this atmosphere. We would like to thank the Beilstein Institute for making the Symposium possible and Dr. Michael Penk for making the event so comfortable and easygoing. 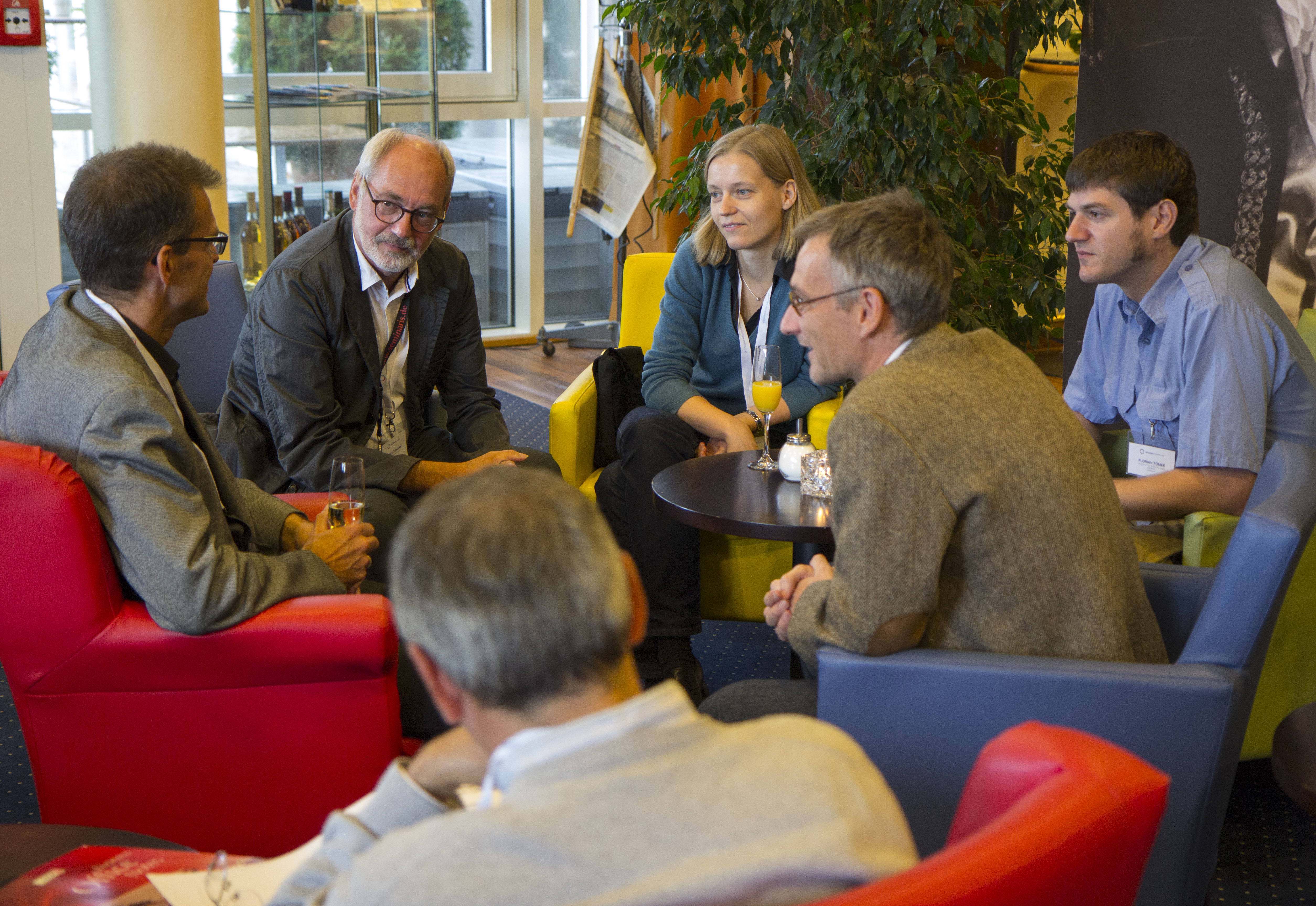 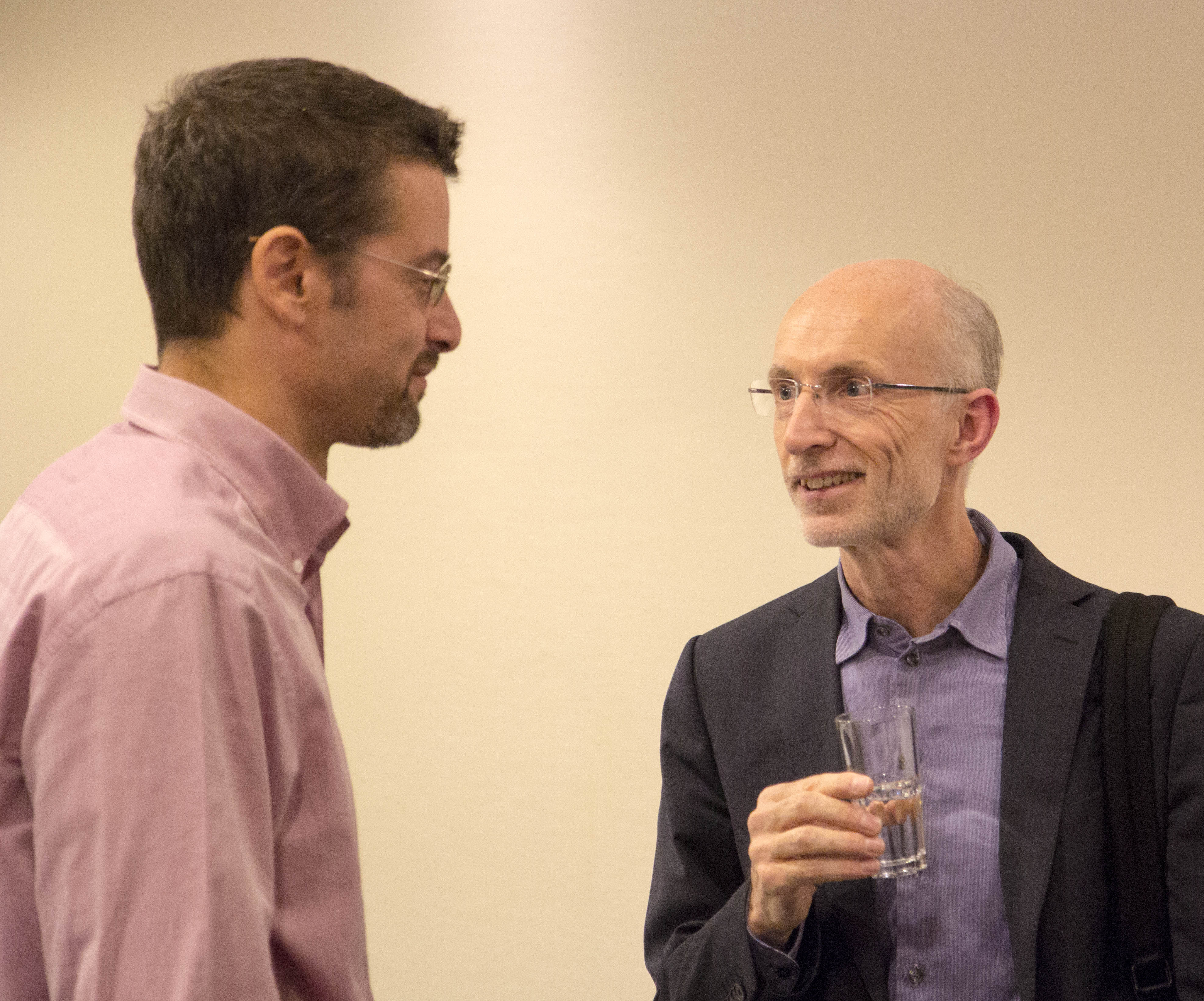 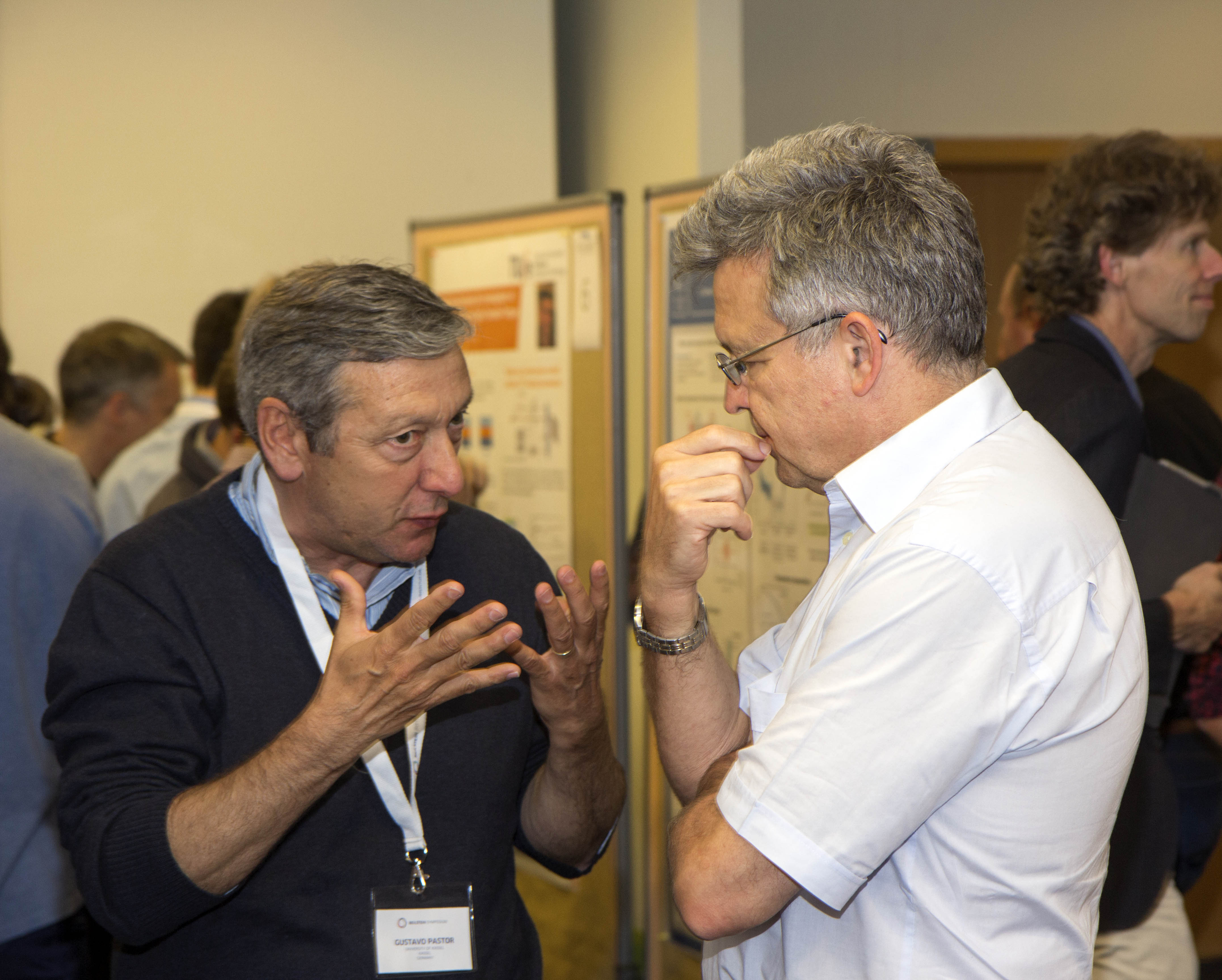 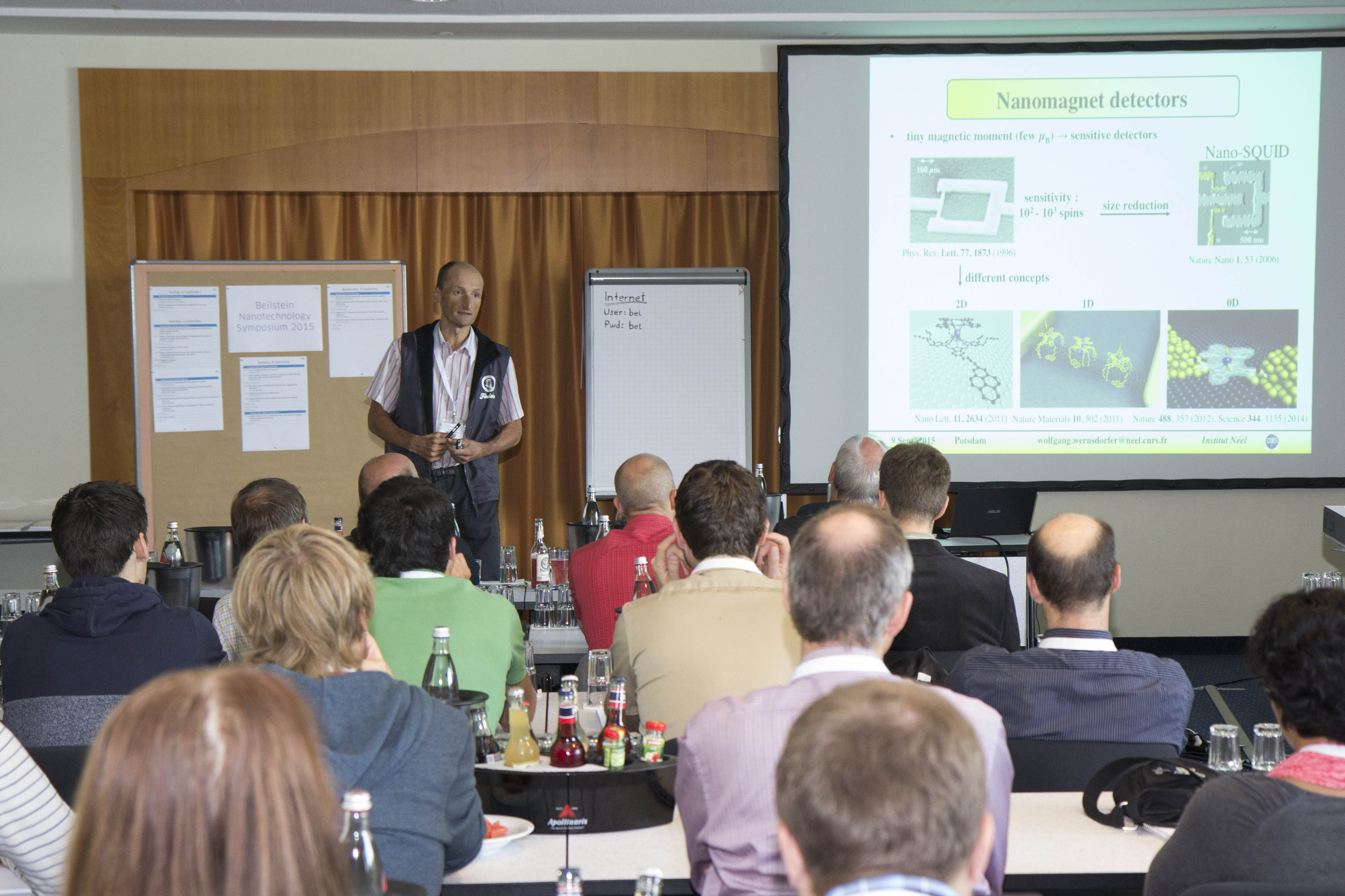 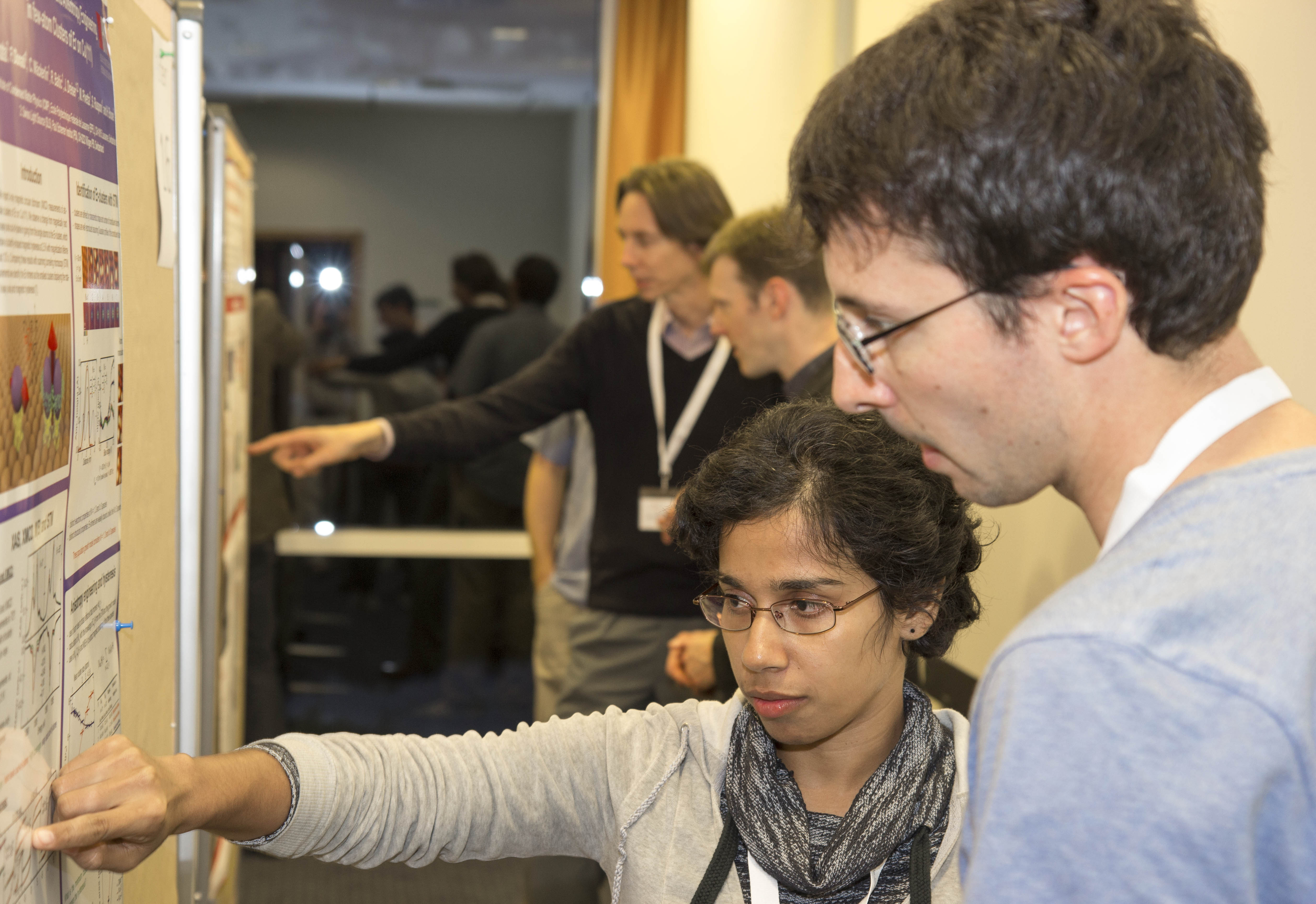 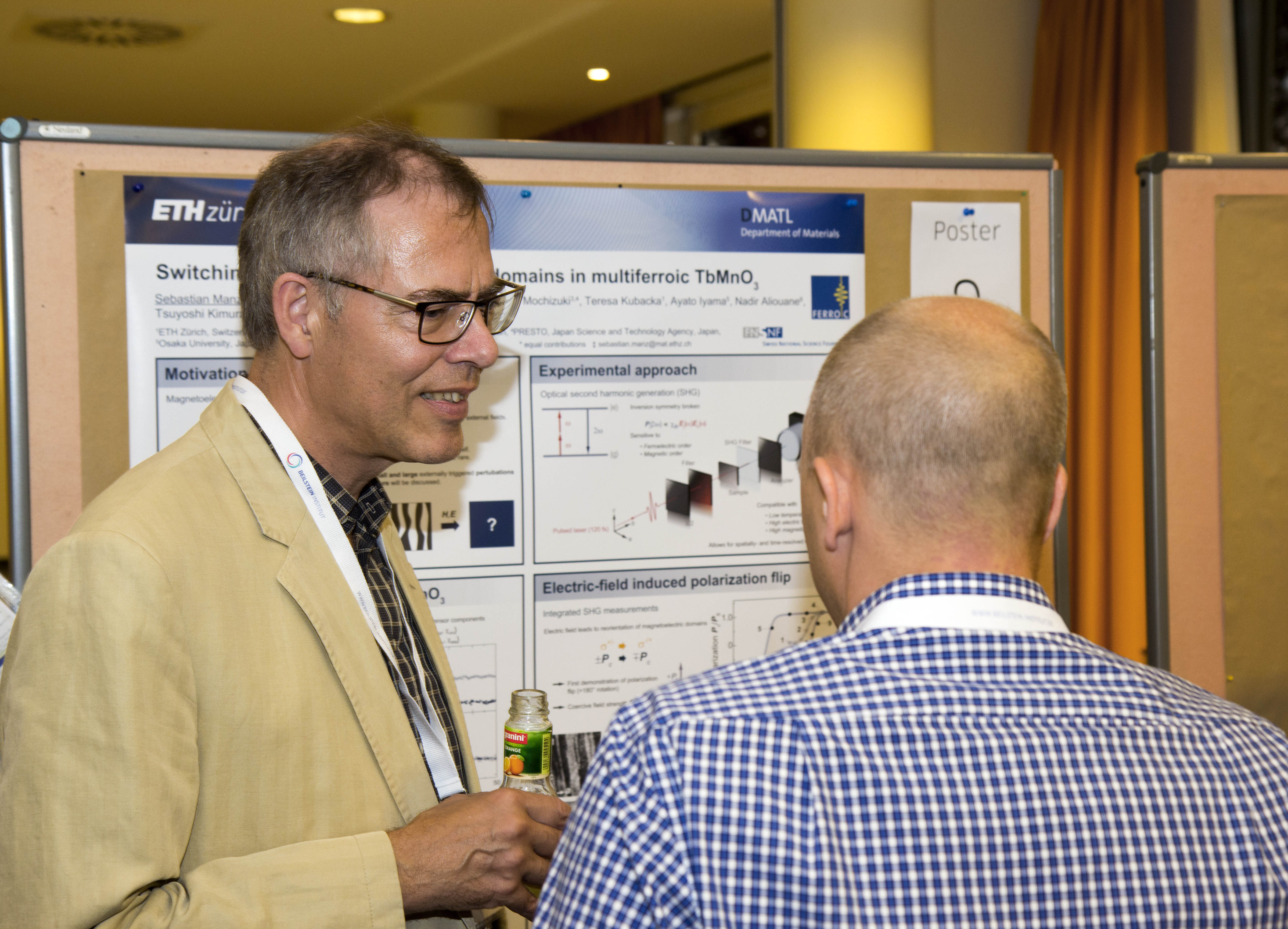 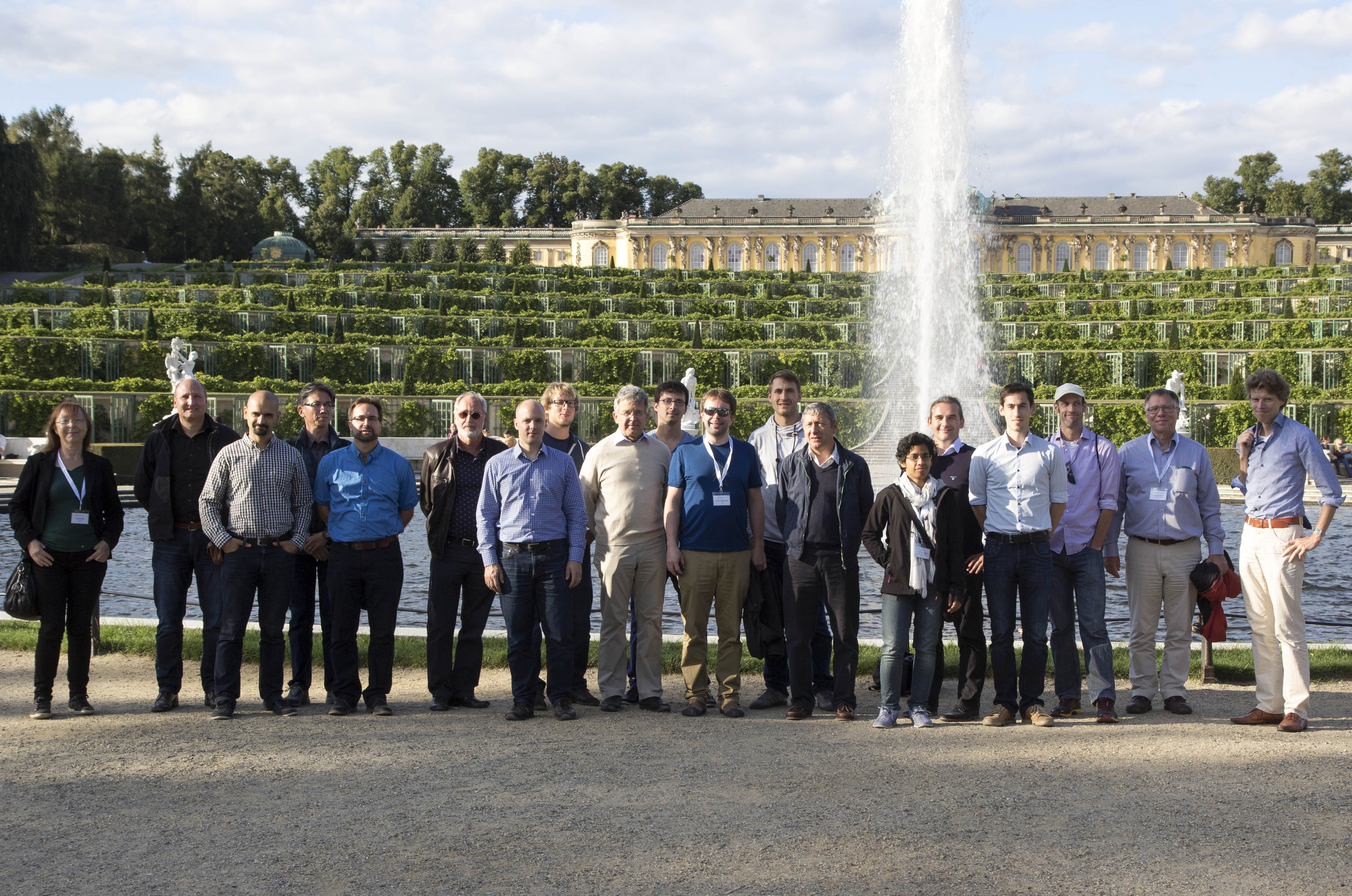